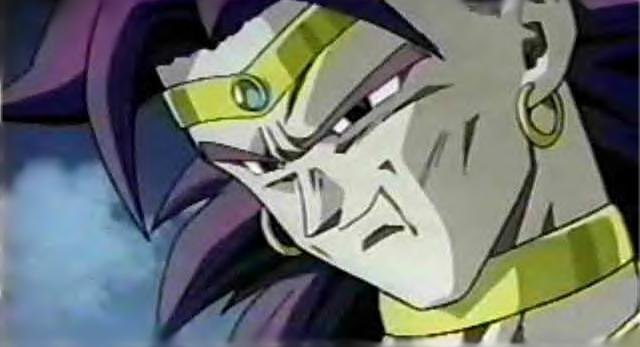 Ah, Brolli, Burori, Broccoli...the legendary super saiyajin. His very existance is shrouded in mystery. Ladies, just take a look at the picture above. Isn't he cute? His outward appearance (atleast as a rageful SSJ) looks like an older version of Mirai Trunks. He is the classic example of an abused child. His father was using him for his power, King Vegeta wanted him DEAD, and besides all this he had a weak mental capacity, (probably due to his power) which was only aggravated by Kakkorot's incessive crying as an infant. Yes, even as a baby it would seem Goku was already beginning to drive everyone around him crazy, including the other babies. And if that isn't enough to make your heart melt for poor Brolli, then I don't know what is.

Why is Brolli one of my favorites? Well for starters he was the first, THE first, to go SSJ. Unlike Goku, he didn't need to watch one of his friends die, and unlike Vegeta he wasn't so overcome with jealously and pride that he pushed himself to the brink of death. No, Brolli is original and one of a kind. He was born with a powerlevel of OVER 10,000, and even after all this, was still a polite, almost shy well mannered young man, not at all arrogant about his abilities. A picture perfect son... That is, until the sight of Kakkorot. He was also one of the few people to make Prince Vegeta whimp out. Yes, not much can shake the mighty Saiyan Prince's confidence, but if you've ever seen the Brolli special, Vegeta was doing some major whimpin'.

And if Vegeta's afraid, then you KNOW something's up. Brolli literally didn't know what the words 'Hold back' meant. He gave everything his all. Now, one thing about Brolli that impressed me was his incredible memory. Even after all those years, when he finally DID reunite with the object of his insaneous rage, (aka Goku), he instantly remembered EVERYTHING. Now THAT is ONE photographic memory. Probably one of the biggest reasons I like Brolli is because of his similarity to Cell. The things he said:

"If you'd peacefully let yourselves get killed, you wouldn't have to face so much pain"
"It's over...in the end, garbage is still garbage."


Yes, he definately said some very Cell-ish type things. But even though Brolli was possibly one of the most powerful people on DBZ, he still had his share of flaws:

1.) For one thing, I wouldn't necessarily classify him as evil. For the better part of his life he was being controlled by his father. Sure he might have destroyed a few things along the way, but it wasn't really HIS doing. Also, this is just my opinion, but I think that he was being condemned for doing something in which all Saiyans were basically breed to do; become stronger. For having an unusually high powerlevel, King Vegeta sentenced him to death. Sort of hypocritical, wouldn't you say?