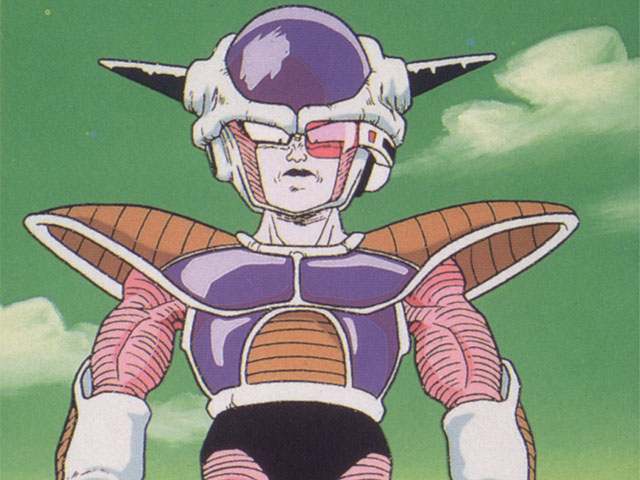 Frieza, Freeza, Freezer. What can I say about this guy? Well, the first major villain he was. And Powerful too. I mean, the guy could fight people with just his BREATH. (i.e., remember the epi when he blew the namek warriers around? LOL) Now THAT is some bad breath! (No pun intended) And that voice of his...many people didn't like his voice, but I think that it fit him perfectly. Frieza's voice was so light and feminine..it was almost scary. And that was precisly the irony of it. Not to be stereotypical, but when we think of 'strong' and 'power', we usually automatically think of males. But to see this supposed male here, small in stature and sounding and acting like a girl, it just creeped the heck outta some people. And to see him so calm, speaking in that high pitched voice was VERY discerning to me. In most cases, villains almost always either have that deep full voice, or that scratchy sinister one. To come across an exception was a very unique change indeed. However.....The alien Prince (or Princess) Frieza DID have his drawbacks. Several infact. For instance:

1.) He was a bully. Now most people might not think this a very plausable reason, being that most villains are considered bullies anyway. But Frieza...he was the worst kind of bully. Frieza was, (at the time) the most powerful being in the universe, correct? And yet, he still insisted on attacking the weak. True, he was indeed a villain, but even THEY have some sense of honor. All fighters have that unspoken code, not to go after the weak. But Frieza...he took DELIGHT in defeating people who were CONSIDERABLY weaker than he was. Where was the challenge in that? It's like stepping on an ant and thinking you've won some great victory. Ofcourse you're going to win with those kinds of odds. Frieza just struck me as an arrogant coward. A kid who's father obviously spoiled him too much and taught him too little.

2.) His dependence on others. Frieza was always depending on his henchmen/servants...whatever you want to call them, even though he kept insisting that he was perfectly capable of getting the job done himself. Then, when his henchmen failed, he had the nerve...the indignace even, to get mad, when all he had to do in the first place was just do the job himself...which would have saved him alot of trouble and time in the long run. His actions just showed how truely miserable he really was. (sorry Freiza fans) It even seemed on certain occasions that he sent his henchmen out knowing that they'd fail, just so he could punish them...if they even survived whatever ordeal he sent them on, that is. If he was so confident in his own abilities, then why didn't he just do something for himself? LAZY. Besides being a spoiled bully brat, we can also deduct from his actions that he was lazy. (Especially since he was seen, most of the time, seated in that hover chair.) His entire empire was built off the fact that his father was King and had probably already conquered a great deal many planets before Frieza even got the notion.