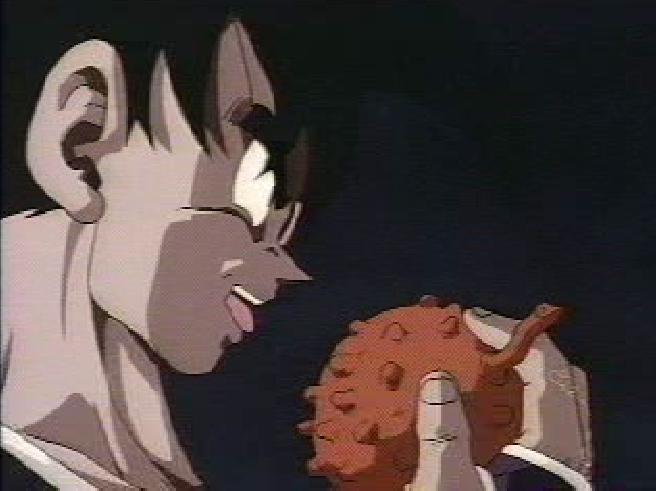 Turles the turnip. (his name pun) Before Cell and Vegeta, this guy was my FAVORITE Villain. He definately had the best of BOTH worlds: He looked like Goku, but with the attitude/personality of Vegeta, which is an AWESOME combination within itself. And I think that ALL of us agree at how simply fantastic his voice was. Voices count, especially with villains, and Turles' voice was low and breathy...very seductive and calm like. I saw the original english dubbed Tree of Might, not the version they aired on Cartoon Network, and I was completely blown away by EVERYTHING. He was so brutally RUTHLESS in his fights. He took no exceptions, even with little Gohan. When he threw that blast into the sky to mimic the moonlight, he was smart enough to destroy it before it had a chance to affect him. Now THAT'S what I call common sense...something of which alot of villains, unfortunatly, seem to LACK. However, if it's too good to be true, then it probably is, and Goku look-alike Turles was no exception.

1.) What was his motive? Ok. He planted the Tree of Might on earth so that he could become stronger...(which was only temporary anyway) but then what? Look for another planet who's conditions were exceptable for growing another tree?? Lets be honest. Turles didn't want to take over the world; he wanted to grow FRUIT. All throughout the movie that's all we hear him talk about. Eating the fruit from the Tree of Might and becoming the most powerful fighter in the universe. While other villains around him were talking of either one of three things:

1. Taking over/becoming the strongest fighter in the universe
2. getting revenge on Goku for something, or
3. collecting the Dragonballs to wish for immortality,
Turles was growing fruit from a parasitic tree. A tree that completely drained all life force from it's planet-host. Sure he looked great and had an ultra cool voice, and he was definately NOT a weakling...but he seemed just a little too attached and dependant on that tree. I mean, what ever happened to good ol' fashioned TRAINING? It was good enough for Prince Vegeta, so why couldn't HE do it too? But no. He chose the easy way out, and in the end ended up dying; actually helping to destroy his own tree. (i.e. At the end he was blasted up into the tree...::shudders::) A truly sad, but ironic end to the warrier rogue Turles.